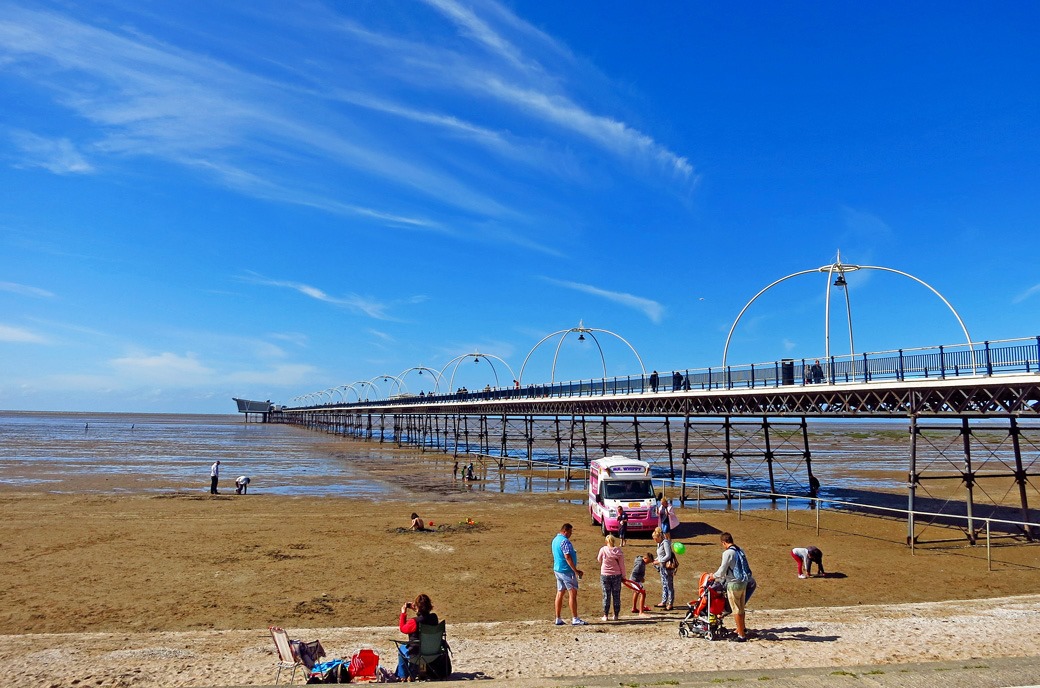 8 Reasons Southport is excited about 2020

Southport has many reasons to be excited about 2020, with multi-million pounds worth of investment set to revamp our seaside resort.

At one end of the iconic Marine Lake The Waterfront area, which includes attractions such as Bliss Hotel, Southport Theatre and Genting Casino, is currently undergoing an eye-catching £15million transformation, with more exciting news set to be announced this year.

At the other end of the lake, Southport Pleasureland owner Norman Wallis is working on rebuilding the park into a national, all-year-round visitor attraction, expanding onto nearby Princes Park and unveiling new reasons for people to visit including an animatronic dinosaur adventure golf park.

Business and council leaders locally are currently submitting bids for up to £25million funding from the government’s Town Deals fund, which could then double to £50million thanks to the Liverpool City Region, with some major projects which could help rocket Southport into an exciting new future.

Cllr Marion Atkinson, Sefton Council Cabinet Member for Regeneration and Skills, said: “Our investment into Southport is ongoing, and there’s lots more in the pipeline.”

Here are some of the major changes you can expect to see in Southport this year, with the aim of dramatically increasing visitor numbers and footfall – and keep your eyes out for more major changes coming soon on the Stand Up For Southport group on Facebook.

1. Bliss Hotel and The Waterfront

Expect some very exciting changes at The Waterfront this year.

The area includes landmarks including Bliss Hotel, Southport Theatre and Genting Casino, and a significant amount of investment has already taken place.

The new Bliss Hotel penthouses for example now provide some of the most stunning views in the North West, while other innovations include Betty – the UK’s first room service robot!

More plans are due to be unveiled this year, after Bliss secured a £15million deal with investor ICG Longbow to support its redevelopment of the area and put it “on the road to being a national destination, as it should always have been”.

Bliss took over the Ramada hotel in December 2016, following this up with the July 2017 acquisition of the 250-year head lease for the Waterfront development from Promenade Estates – which included the Genting casino, the Hungry Horse bar restaurant operated by Greene King and 54,000 of commercial space largely unused since its 2008 development.

In April 2018, the business then took over the running of Southport Theatre & Convention Centre, which had previously been operated for Sefton Council by theatre group Ambassador.

One of the North West’s most popular attractions is coming back with a roar in 2020.

Southport Pleasureland owner Norman Wallis and Sefton Council have signed a  strategic partnership which will see the business expand onto neighbouring Princes Park as part of multi-million pound transformation.

Over the next two years, a Dinosaur Park will start to take shape on what used to be the pitch and putt site. This will feature animatronic dinosaurs and full-scale models.

There are also plans for a zipwire across the marine lake, and a high ropes course.

A letter of intent has been signed which paves the way for both partners to work together to deliver a truly unique tourist attraction to support economic growth.

It is hoped over the next 10 years it will see a radical transformation of the site, to deliver new indoor attractions, a revitalised amusement park and a new hotel.

Together, Sefton Council and Mr Wallis aim to deliver a vision that is expected to support the creation of up to 1,000 new jobs over 10 years in the town, as well as adding more than £25million to the local economy each year.

As well as this, the miniature railway and land train will also both be invested in, to improve connectivity between Southport town centre and this area of the waterfront.

The partnership will form part of the strategic vision for Southport’s tourism offer, which will include a range of projects across the areas adjacent to the site. This includes ongoing work on Southport Pier and The Southport Townscape Heritage Project.

Norman Wallis, Pleasureland’s Chief Executive, said: “This is just the beginning of an exciting partnership that will build on the town’s reputation and thrust Southport into the national and international arena as a leading tourist destination.”

What would you like to see £50million spent on to really improve Southport?

In November, Local Government Secretary Robert Jenrick MP announced that Southport would be able to bid for funding of up to £25 million as part of the government’s £3.6 billion Towns Fund, with the prospect of doubling that due to match funding from the Liverpool City region.

A board of local business and council leaders are currently putting together bids to kick-start regeneration through innovative plans and bring local communities together.

The funding could be used to redevelop vacant buildings and land, drive private sector investment by supporting small businesses and ensure young people have the skills they need to get good jobs. Communities will also be able to consider how they can boost their transport links and increase access to high-speed broadband.

Robert Jenrick MP said: ”This government is committed to levelling up all parts of the country. We created the £3.6bn Towns Fund to help businesses grow, connect communities and give people the skills they need to succeed.

“But no place is exactly the same. That is why we want to help local people to decide how this investment of up to £25 million in each town can be used to help create new businesses, new jobs and new homes for generations to come.”

What would you spend the money on? 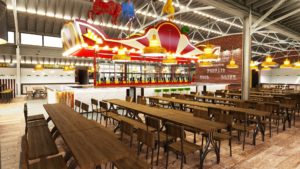 The historic Victorian landmark is being converted into a stylish food and drink venue, filled with small hot food outlets and bars. It will also include a large events space to the rear, which will allow for a variety of uses including high quality markets.

A similar scheme in Altrincham has proved to be a huge success.

In the past decade, Sefton Council has led the £20million transformation of The Atkinson on Lord Street, the £6million upgrade of Kings Gardens, and £3.5million worth of changes to Southport Pier.

They are starting the 2020s with Southport Market as their newest project.

DB8 Designs, along with Dawnvale Group and Sefton Council are leading the transformation.

The market will focus on Southport’s coastal influences, sourcing ingredients from local producers and offering an event space to create a social hub in the seaside town.

The designers are set to draw inspiration for the market from the town’s iconic locations including Southport Pier, the Botanic Gardens and Southport Pleasureland.

Blackhurst’s butchers have been in the market for 40 years.

Owner, Tony Blackhurst, said: “I am really excited to see the latest plans and look forward to Blackhurst’s butchers playing a key role in the market’s transformation.”

More than 400 new jobs could be created when Sainsbury’s starts work on its huge new supermarket at Meols Cop retail park in Kew.

Plans for a 60,000sq ft store and petrol station have finally been approved after years of wrangling over the future of the former Homebase store and two adjoining units.

Sainsbury’s is also committed to keeping open its existing store on Great Georges Place, just off Lord Street, for at least the next five years.

Sainsbury’s said that the new complex would create 400 jobs – as well creating more shopping choice for consumers in Southport and West Lancashire. 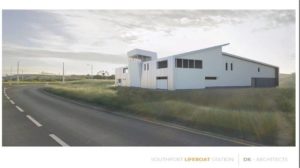 Building work is continuing on the £1.4million new Southport Lifeboat base on Southport seafront.

Despite a lot of the funds being in place and having obtained planning permission in August 2015, the Trust have been working with Sefton Council and Natural England to meet the conditions necessary for approval to be granted for signing over of the land.

Trustee Nicola Goldup said: “Whilst it has taken longer than all parties had hoped, we have been able to tick all the boxes necessary to satisfy all parties and can move forward in delivering an iconic building for our seafront, which will serve as an operational base and training centre for all of our crew and lifesaving equipment for generations to come.”

Construction on what will be the largest lifeboat house in the North West is due be completed in 2020.

A larger, purpose built station not only means that both lifeboats and their respective launch vehicles can remain coupled together, but will also allow room for the much needed facilities our crew have been lacking for so many years; all at a location closer to the beach.

The current boathouse was built in 1886 and has served Southport’s independent crew loyally since our establishment in 1987. Inevitably, the facilities are now dated, with the station suffering from a lack of washing provisions, heating and space; meaning crew often go home cold and wet, with kit that can still be damp three days after being used.

Nicola said: “We would like to thank everyone who has helped so far; the trust would not be in this position without the kind support of the people of Southport. Wholeheartedly, we thank you.”

The dream of a new lifeboat house has been in the pipeline for nearly 20 years, however, the National Lottery rejected a proposal for a new station in 2000 leaving the Trust to raise the necessary funds itself.

The hard work is not over, despite having the funds to build the station, the Trust still needs your help and support as they look to raise funds to furnish the inside of the building once it has been completed.

Visitors have enjoyed seeing the changes with Southport Pier undergoing a huge £3million makeover which will “truly transform the attraction”.

The landmark structure, which was opened in August 1860, is the oldest iron pier in the country and at a length of 1,108m (3,635ft) is the second-longest in Great Britain, after Southend Pier.

Hundreds of thousands of people take a walk along Southport’s pier each year.

The first phases of the revamp are now complete, including extensive structural repairs and painting, a new-look Pier. The final phase of works will see a slide and steps between Southport Pier and Southport Beach.

Southport BID and Sefton Council were celebrating last year when they won funding for their The Southport Townscape Heritage Project.

This project aims to enhance the quality and strength of the linkages between the town centre and the seafront and Sefton Council.

The National Lottery Heritage Fund has awarded £1.6m to Sefton Council, which has been working alongside Southport Business Improvement District.

The new additional funding award will be added to the council’s own contribution of £200,000 into a growing pot that could eventually amass up to £2.5 million for the project.

The STHP seeks to enhance the character and historical identity of Southport, including:

• The structural repair of historic buildings

• Enhanced use of vacant floor space in historical buildings

David Renwick, National Lottery Heritage Fund’s Director for the North of England, said: “We’re delighted to award a grant that will go towards breathing new life into the buildings found in the Lord Street and Promenade Conservation Areas to be enjoyed all-year round.”

Blog by Andrew Brown  Who said retail was dead? It’s alive and well and thriving in...